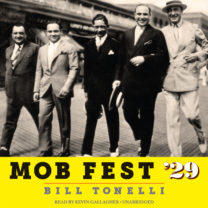 In Mob Fest ’29, Bill Tonelli, a former editor at Esquire and Rolling Stone and longtime journalistic student of the Mafia, asks us to imagine the scene of the alleged genesis of organized crime in America.

In the early summer of 1929, a who’s who of mobsters–Al Capone, Lucky Luciano, Meyer Lansky, Frank Costello, and Atlantic City’s Nucky Johnson, the real-life inspiration for Steve Buscemi’s Nucky Thompson in the HBO series, Boardwalk Empire–rolled up their pant legs and walked the beaches of Johnson’s hometown to hash out the future of organized crime. “Dozens of barefoot tough guys in expensive suits trying not to get their pants wet,” as Tonelli describes them. With Prohibition winding down and the potential for even more money to be made in the liquor business, America’s top mobsters agreed to this unprecedented summit and alleged “peace treaty,” turning Atlantic City into a “Camelot of corruption.”

At the core of Tonelli’s story, however, is an insistent aversion to myth. By acknowledging the questionable accuracy of “gangster literature”–and even getting famous writers to admit that much of the written history of the mob is bullshit–Tonelli debunks the commonly accepted versions of the ’29 summit, and crafts a funny, obsessively reported hybrid of a story, part wise guy romp, part investigative mini-masterpiece, and part treatise on fact vs. fancy in the world of Prohibition-era mobsters. Thug lit at its best. — Neal Thompson, Amazon.com