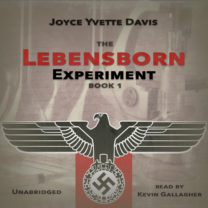 Amid the chaos and destruction of World War II, racial profiling runs rampant. After kidnapped children whose appearances fail to meet the Nordic ideal are taken to concentration camps, some are used in experiments to satisfy the Reich’s quest for Aryan Superiority.

It is April 28, 1945, and a sinister struggle between life and death secretly takes place high in a dingy tower of a medieval castle in the Black Forest. Under the watchful eyes of Nazi Colonel Otto Strass, notorious inventor Dr. Josef Weiss injects a ten-year-old Polish boy with an experimental serum, killing him-that is, until the child, Adok, is miraculously resurrected with unforeseen side effects.

Meanwhile, somewhere in the castle dungeon, a Negro American soldier, Sergeant Kapp Johnson, awaits ceremonial execution. But things go awry. On that same day, Hitler’s unexpected suicide throws the castle into bedlam. In the ensuing confusion, Kapp is mistakenly given the serum. In a matter of minutes, Kapp has been given a gift even God cannot bestow upon him: eternal life on Earth. In this exciting historical thriller, an American soldier and a Polish boy who unwittingly become victims